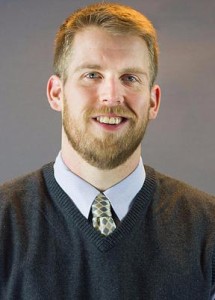 When the new Congress meets in January, unified Republican control suggests that a shift toward the use of block grants is likely to take place. Under Paul Ryan, the House has proposed consolidating federal funding for both healthcare and social assistance into two block grants. Conservatives see this as fostering fiscally responsible innovation. Liberals see it as part of a nefarious plot to gut programs for the poor.

While American pundits and policymakers often discuss the historical shift to block grants during welfare reform, they rarely bring in comparative analysis to this debate. This is a mistake. Canada offers a fuller picture of the promises and pitfalls of block grants. In contrast to the U.S., where block grants make up a mere 1.5% of the federal budget, they account for about 25% of the federal budget in Canada – a country many hold up as a model for U.S. social policy. Moreover, the majority of these blocks grants are for the same functions Ryan has proposed – healthcare and social assistance. This leaves us with a puzzle: Why do block grants seem to work so well in Canada but not here?

The key difference is that 25% of Canada’s block grants take the form equalization grants. These are federal transfers that only go to poorer provinces to bring their fiscal capacity up to the nationwide average. In the absence of equalization, even a poor state with the same tax rates as a rich state will bring in less revenue because of inequities in access to taxable resources (income, consumption, etc). Nobel Laureate James Buchanan argued equalization programs enable poor states to provide the same minimum level of public services without raising taxes higher than rich states. Without it – as is the case in the U.S. – we can expect to see poor states spend less on services, raise taxes, or both. This is exactly what we see when we look at the relationship between fiscal capacity and TANF benefits. 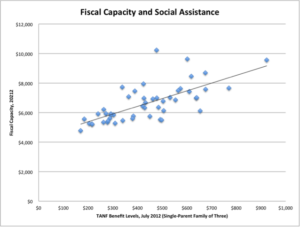 So why doesn’t the U.S. have an equalization program like Canada? The answer is complex but it boils down to the refusal of rich (blue) states to transfer funds to poor (red) states for nothing in return. Although we don’t typically talk about it, Democrats spend much of their time defending policies that disproportionately benefit the wealthy states they represent. For example, California’s Maxine Waters recently defended the home mortgage interest deduction (HMID) while New York’s Charles Schumer has historically been the staunchest defender of the state and local tax (SALT) deduction. In 2014, these two tax expenditures cost the federal government $163 billion in foregone revenue with the majority of benefits going to rich taxpayers in rich states such as California, New York, New Jersey, and Massachusetts. Meanwhile, equalization would have the most benefits for poor states such as Mississippi, South Carolina, and Alabama. Notice a pattern here? 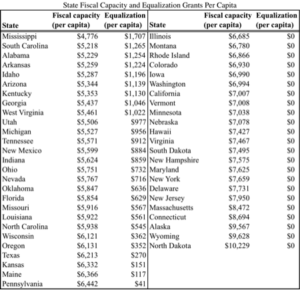 By my estimates, a similar program of fiscal equalization for the U.S. would cost close to $121 billion. Eliminating the HMID and SALT deduction would provide more than enough revenue to fund such a program with one important political problem – it would entail a massive redistribution of resources from (rich) blue states to (poor) red states. As such, it is unlikely to gain the support of Democrats despite the impact it would have on reducing poverty through lower taxes and more robust social spending.

This leaves us with a Catch-22. The use of block grants for social programs works best when accompanied by a program of fiscal equalization for poor states. Republicans have proposed expanding the use of block grants but have remained silent on the possibility of equalization grants, though it is likely they would be more open to it for self-interested reasons. On the other hand, Democrats continue to oppose block grants without understanding or appreciating their role in further entrenching regional inequalities based on fiscal capacity.

Complete Republican control on both the federal and state levels offers the chance to break us out of this vicious cycle. Congressional Republicans should use this opportunity to push their block grant agenda as long as they capitalize on Democratic weakness and push for conversion of unfair tax expenditures into an equalization program as well. It’s a politically smart strategy that would show Americans how Paul Ryan’s reform conservative agenda can successfully combine anti-poverty reforms with fiscal responsibility while offering a viable alternative to competing populist agendas within the GOP.

3 thoughts on “The Case for Block Grants”