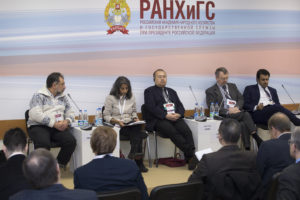 Editor’s note: This year’s Gaidar Economic Forum featured a panel on global transformations, with statements by Wolfgang Streeck, Ho-Fung Hung, Mishaal Al-Gergawi, and Monica Prasad. We are pleased to share their written statements in full. You can also watch the panel on You Tube.

The Gaidar Economic Forum in Moscow is a splendid occasion to practice the ethnography of ruling elites. Every January it convenes a crowd of several hundred people including acting and former politicians, central bankers, business journalists, corporate executives, provincial governors, and us, the academic ‘experts’. What makes it different from the bigger event in Davos is, of course, the peculiarity of Russian politics: both the awkward international marginalization of a former superpower and the long-running internal division of Russian elites into liberal modernizers and hardliners. Yet these conventional labels stand for more complex historical genealogies that one might think.

The Forum is named after the late Yegor Gaidar, a key market reformer in the chaotic aftermath of Soviet collapse. This family name is legendary to all former Soviets. Arkady Gaidar, the economist’s grandfather, was only eighteen when he commanded a Red Army regiment during the civil war (1918-1921). Later in the 1920s he wrote the romantic revolutionary tales for children that, next to the poetry of Vladimir Mayakovsky, powerfully imagined the new Soviet identity centered on the heroic defense of a socialist future for the whole of humankind. His son, Rear Admiral Timur Gaidar, in 1961 was Soviet adviser in Cuba helping to repel the Bay of Pigs invasion. Yegor Gaidar, a grandson of the revolutionary dynasty, remembered how in those days he received a pistol from Che Guevara himself. Yet by the age of thirty Yegor Gaidar, already chief economics editor at the Kommunist, the theoretical journal of the Party, was led by his own Marxist analysis to the realization that sheer ideological will could not violate the logic of historical stages. Russia would have to have its bourgeois revolution, after all. The collapse of the USSR in 1991 ushered this clandestine ideological debate into the brutal realm of revolutionary policy. The momentously disorganized nuclear superpower suddenly faced wholesale bankruptcy, provincial separatism, and starvation in its biggest towns. Free markets introduced in a bang were then seen as both an economic solution and a political weapon against the bureaucracies of the old regime.

All three Gaidars were famously charismatic. Yegor gathered around himself a group of young enthusiastic reformers, and in 1991 they decided to seize state power, much like the Bolsheviks did back in 1917. The outcome of their revolutionary project remains as controversial as the outcome of the 1917 revolution. This brief historical overview helps to explain why Gaidar’s revolutionaries still gather to debate policy options, although by now many of those revolutionaries look more like cosmopolitan technocrats. Still, a senior Kremlin official admitted with a sly grin that to unwind at the end of the day he watches David Harvey’s lectures on Das Kapital on his iPad. In another big office I saw Russian translations of Charles Tilly, Randall Collins, and Richard Lachmann on the bookshelves.

Immanuel Wallerstein was first invited to the Forum a few years ago. Addressing in their respective languages the prime ministers of Spain, France, Australia, and Russia, Immanuel proceeded to admit with supreme calm: I am a sociologist and not a politician, not even a former politician (a slight nod to Romano Prodi); therefore optimism is not in my job description. I can analyze only what you already mostly know. After 2008 you threw a lot of money at the crisis. Governments make money in three ways: tax, print, or borrow. Each of these ways, as you know, creates problems down the road. States can also use repression but that comes with its own escalating costs. These structural conditions in the coming 10-15 years will be severely limiting to all politics in the world-system. You can do relatively little but at least we should try to minimize the pain.