“Although democracy is often assumed to ensure that states respond to social demands, voters are typically ignorant of basic political information, such as the names of their representatives, the policies governments implement, or the effects policies have upon society,” DeCanio writes in his new book Democracy and the Origins of the American Regulatory State.

To what extent does voter ignorance affect policy outcomes? What are historical examples of this in the US? And what does any of this have anything to do with the American regulatory state? 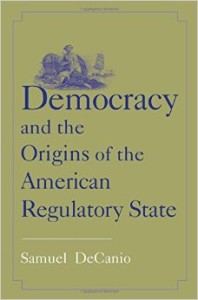 According to DeCanio, voter ignorance grants modern states a great deal of autonomy, facilitates elite manipulation of public opinion, and may permit regulatory capture in ways that cannot be explained by existing theories. What he attempts to do in his book is to show how American political elites took advantage of high levels of voter ignorance to create a new type of regulatory state with lasting implications for American politics.

There are two historical cases that inform his theoretical argument: the delegation of monetary policy to the Treasury Department, and the regulation of railroads- specifically the creation of the Interstate Commerce Commission (ICC). In both cases, the author argues, state and political elites were able to capitalize on voter ignorance to devise policies and institutions that essentially resisted popular demands. That these policies and institutions are among the initial building blocks of the American regulatory state says something about the undemocratic origins of the latter.

In the 19th century, many populist groups in society—farmers, workers, and Western mine owners—supported an inflationary monetary policy. The Coinage Act of 1873, which discontinued the coinage of the silver dollar and made gold the monetary standard for the nation posed a blow in the face of this movement. It was perceived by the populists as an instance of corrupt economic elites buying off politicians to influence policy outcomes. The same year, a banking panic swept across the country bringing monetary issues back into the public eye. In the aftermath of this panic, the Democrats gained a majority in the House for the first time since the conclusion of Civil War. This was largely a result of Democrats being seen as the Party that supported populist causes—particularly currency inflation.

In this context, sitting Republicans in the House drafted a bill to delegate monetary authority to the Treasury Department in an effort to prevent the incoming Democrats from implementing inflationary currency policies.

DeCanio’s point is that the delegation of monetary authority to the Treasury was an attempt by Republicans such as John Sherman and George Edmunds to insulate monetary policy from popular influence. The Treasury department was given new powers specifically to resist popular demands.

DeCanio tells us a similar story about railroad regulation in the nineteenth century. Popular distrust of railroads was widespread in the period. Democrats wanted Congress to outlaw certain practices, especially price discrimination. The latter was a big concern to small farmers who were charged higher prices for shipping products to shorter distances. Republicans instead pushed for an independent commission, not to implement popular demands, but to insulate regulatory policy from public opinion. The creation of Interstate Commerce Commission (ICC), America’s first independent regulatory commission, inaugurated a form of state authority that was increasingly federal, regulatory and bureaucratic. Once again, the objective behind it, according to DeCanio, was to effectively resist populist demands.

In this case, as in the case of the expansion of the powers of the Treasury, autonomous state elites were able to pursue policy objectives that did not reflect popular demands. Both developments show how poorly the public understood the forces influencing American politics, and how little it was able to shape them.

As DeCanio notes, the expansion of the American regulatory state is often attributed to the economic, institutional, and intellectual innovations of the Progressive Era. What this book tells us is that American state was created before these developments, and for reasons that were unrelated to the economic and intellectual forces that influenced progressive reformers. The empowerment of bureaucracies armed with discretionary authority over the national economy in the 19th century was not intended to satisfy societal demands but instead to achieve conservative policy objectives.

Democracy and the Origins of the American Regulatory State is an important book. It challenges basic assumptions about democratic governance, the forces that initially created the American regulatory state, and the role of public opinion in shaping it.

Basak Kus (Ph.D., University of California-Berkeley) is Assistant Professor of Sociology at Wesleyan University. Prior to joining Wesleyan, she held postdoctoral appointments at Princeton’s Niehaus Center for Globalization and Governance, and Yale’s MacMillan Center for International Studies. Between 2010 and 2012 she lived in Ireland, and taught political economy, comparative politics, and public policy at the University College in Dublin.